The History of Holy Cross Parish 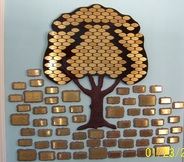 There were but few Catholics in the early days of Templeton, incorporated in 1762 and currently made up of the villages of Templeton, East Templeton, Otter River and Baldwinville. During the next century, the numbers grew dramatically with the immigration of Catholics from Ireland, Poland and other countries, some to find religious freedom and others seeking a better life for their families through work on the railroad or in area mills.

When it became necessary to build a Catholic church, St. Martin's Parish in Otter River was founded in 1851 as part of the Springfield Diocese. The church, built in 1853 with great effort and sacrifice, was filled each Sunday to overflowing, growing to 1,900 faithful by the centennial year of 1951. At that time Bishop John J. Wright, first bishop of the Diocese of Worcester (formed in 1950), approved a petition to have a place to celebrate Mass in East Templeton.

On July 1, 1951, the first Catholic Mass in East Templeton was celebrated by Rev. John A Donohue, pastor of St. Martin's. It was celebrated in the second floor dance hall of the GAR building (since torn down). Buses made the rounds as far as Riley's Switch, Templeton each Sunday morning, gathering Mass-goers from Templeton Center, via Baldwinville Road to Baptist Common and along the East Templeton-Baldwinville Road to the hall. Attendees were so numerous that they not only filled all the chairs set up on the dance floor, but many were left standing.

After several weeks, circumstances necessitated making plans for our own place of worship. In October of 1951 ground was broken for a basement church. The first Mass held there was Midnight Mass on December 25, 1951. Holy Cross Chapel, a mission of St. Martin's, was established as a parish on September 2, 1952, with Rev. Joseph A. Moynahan, D.D. as pastor. The 18th parish created by Bishop Wright, it serves the faithful of East Templeton, Templeton, and the town of Phillipston. A rectory was built across the street on Lake Ave. Societies for men and women and a Catholic Youth program were founded almost immediately.
​
Our second pastor, Rev. John J. Sweeney, organized a building fund in 1956 which resulted in the building of the upper church, designed by Dirsa and Lampron, architects. Builders Columbus and Berg of Gardner were awarded the contract and work commenced on September 23, 1957. The first Mass celebrated in the new church was on August 24, 1958. The former basement church was renovated as a parish hall.

In 1998, under the direction of Rev. George O'Brien, an Activity/Catechetical Center consisting of six classrooms was added to the church and the rectory was updated.

Harkening back to our beginnings as a mission of St. Martin's in Otter River, the two parishes were once again joined together under the direction of one pastor, Rev. Joseph Jurgelonis, in 2006. With changing demographics and a decline in the number of available priests St. Martin's Church has now become a mission of Holy Cross Church.